Come and explore the crown of India- where the natural beauty is blest by the Gods... where the misty morning sprawls over the snow clad peaks... where the sunlight gives a gentle touch to the woods and waters, valleys and hillside... If there is heaven on earth, it is here in the divine lands of Jammu & Kashmir!!

Jammu & Kashmir, the sixth largest state of the Indian union, is mostly mountainous with stretches of valleys and some mountain lakes. Nature lovers from all over the world flock to this northernmost extremity of India for destinations such as Gulmarg, Pahalgam, Leh, Patnitop, and Ladakh, comparable to the Alps. 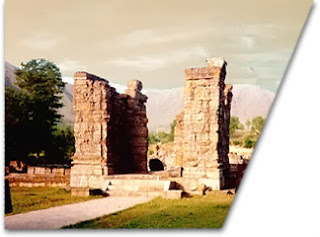 Kashmir is the land of beautiful valleys, high mountains, crystal clear water falls, beautiful landscape & range lands, forests, rivers, beautiful lakes, etc. It is called heaven on earth. Kashmir has 5,000 old history. It was a state of Saints and noble people. The people of different religions were living in peace and harmony. But in 1818, Maharaja Ranjeet Sing attacked the warrior tribe of Poonch ( Suddozai's)  at Mung & Palandri. His army was defeated badly by Suddans. Ranjeet Sing was never defeated in war & he was calling himself the 2nd Alexander the Great, but after this defeat by Suddans he stopped calling himself Alexander.


Then in 1832, Ghulab Sing attacked Poonch again with an army of 600,000 troops against only 60,000 Suddhans Worriors. They slaughtered 35,000 young Suddhans and skinned of 27 Big Elders including Sardar Sabaz Ali Khan & Sardar Malli Khan. 2,700 children & 7,000 women were raped and then murdered. Then, in 1947 the sub-continent was divided on the basis of Two Nation theory ( Hindus & Muslims). 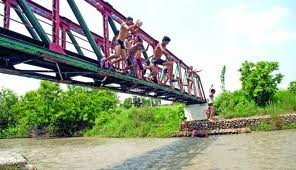 Ranbir Canal - A small garden along the Ranbir Canal, which runs through the city outskirts, provides a cool picnic spot during the summer. The canal branches off from the river Chenab at Akhnoor, 32 kms away. Its water remains icy-cold throughout the year and its banks serve as good viewpoints and walkways 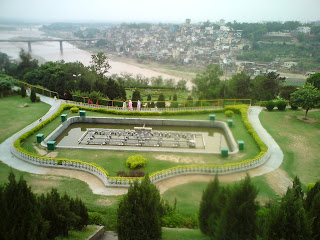 Bahu Fort & Gardens - Situated 5 kms away from the city centre, Bahu Fort stands on a rock face on the left bank of the river Tawi. Perhaps the oldest fort and edifice in the city, it was constructed originally by Raja Bahulochan over 3,000 years ago. The existing fort was more recently improved upon and extended by the Dogra rulers. Inside, there is a temple dedicated to the Hindu goddess Kali. An extensive terraced garden, known as Bagh-e-Bahu, has been developed around the fort. 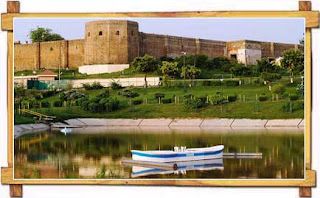 Patnitop - Patnitops Is the most popular tourist spot of Jammu region. Located 112 kms from Jammu this famous hill resort is perched on a beautiful plateau, at an altitude of 2024 metres across which the Jammu-Srinagar Highway passes. It has lush green meadow and pine trees which resembles with Gulmarg. Patnitop offers beautiful picnic spots, peaceful walks and breathtaking views of the   mountains cape of the Chenab basin. In winter, it is covered with a white carpet of snow and its slopes have been successfully experimented for skiing. Skiing courses are conducted at Patnitop in the months of January and February. During winter months there are introductory courses for tourists / beginners at gentle gradient slopes of Patnitop. At Madhatop (5/6 Kms from Patni top on Sanasar Road) excellent possibilities for all kind of skiing exist. Skiing equipments and wooden sledges are available on hire at Patnitop and Sanasar. For beginners Instructors are also available. Accommodation is also available at Patnitop Hotels. 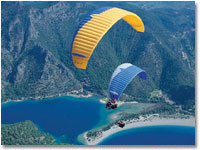 Sanasar - 129 Kms.from Jammu and only 19 Kms. from patnitop is Sanasar (2079 m), a satellite resort of Patnitop, with a cup-shaped meadow surrounded by gigantic conifers. A place for a quiet holiday, the meadow has now been developed as a golf course. There are several walks in the surrounding hills. The resort itself is ideal for paragliding, which is being promoted by the Tourism Department. Equipment can be hired from the tourist office in Jammu city. May to June and September to October are suitable months for paragliding in Sanasar. Tourists with own vehicle can go on to Sansar from Patnitop and return by the evening. The resort is 19 kms from Patnitop and a road connects the two. Sansar can be reached by bus or taxi from Jammu, via Kud and Patnitop 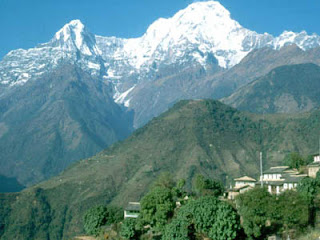 Katra - Situated 50 Kms. from jammu this small town serves as the base camp for visting the famous shrine of Vaishnodevi in the Trikuta hill 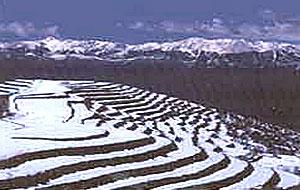 KUD - Located 103 Kms. from jammu, this popular resort is situated on the Jammu-Srinagar Highway, at an altitude of 1738 metres. 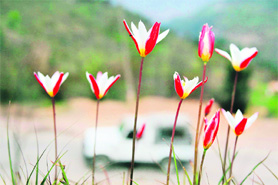 Batote - Situated 125 Kms. from jammu at an altitude of 1560 metres on the Jammu-Srinagar national highway, this resort straddles the forested slopes of the Patnitop mountain range, overlooking the spectacular lie of the Chenab gorge. 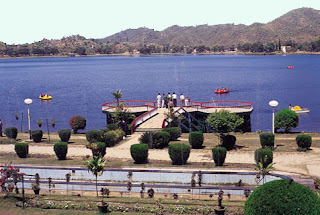 Mansar Lake - Mansar Lake located 62 Kms. from Jammu is a beautiful lake fringed by forest-covered hills. Boating facilities are available in the spot. Every year around Baisakhi, a food and crafts festival is organised here by J&K Tourism 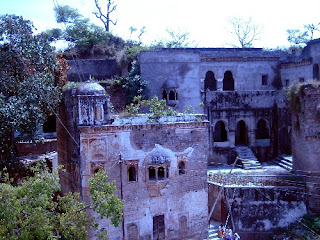 Purmandal - 40 Kms. from Jammu, just off the National highway leading towards Pathankot is the Purmandal Temple Complex built on the banks of the sacred, mostly underground river Decak. Often referred to as 'Chhota Kashi', its main temple is dedicated to 'umapati', while the other temples are associated with Shaivites of the Kashmir Valley. Regular bus service from Jammu 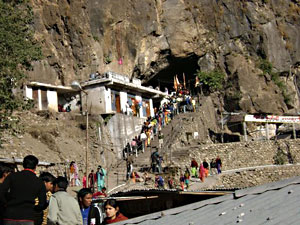 Shiv Khori - 100 Kms. from Jammu this holy cave, nearly a kilometre long with a 4-feet high naturally formed shivaling, is considered second only to the shrine of Vaishnodeviji. A major festival is held here on Shivratri Day.

Dera Baba Banda - It is a major Hindu-Sikh pilgrimage centre situated 75 Kms from Jammu. Baba Banda Bairaagi was Guru Gobind Singh's favourite 'Saint-Soldier', who had the Gurudwara constructed on the banks of river Chenab, where he spent his last days

Gauri Kund- Short of Sudh Mahadev is the legendary spring where the Goddess parvati used to bath before commencing Her daily prayers at Sudh Mahadev. This spring came to be named after Her as 'Gauri Kund'.


The local people are mostly involved in agriculture. Kashmir is a leading exporter in agricultural products such as apples, barley, cherries, corn, millet, oranges, rice, peaches, pears, saffron, sorghum, vegetables, saffron and wheat. The manufacturing industries for handicrafts, rugs and shawls contribute a major part in the state's economy.
The state of Jammu & Kashmir is situated mostly in the Himalayan mountains, therefore it is frequently visited by the adventure enthusiasts for trekking, rafting and skiing. Some of the major pilgrimage centers of India, including the Amarnath Caves and Vaishnodevi Shrine are situated in Jammu and Kashmir. Therefore, tourism also contributes a lot towards the economy


May be they will divide Kashmir in to five regions with self -governance rule can be applied. This year is very important for Kashmir's. God help them so they unite this time to decide their future because if there is peace between these two Nuclear Rivals India & Pakistan South east Asia will make progress in leaps and bounds. 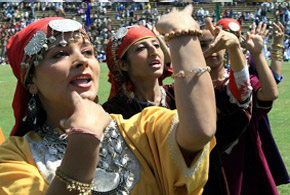 The state (often called J&K) has been a prime centre for learning Sanskrit and Persian since time immemorial. Today, J&K comprises of Hindu, Islamic and Tibetan culture. The diversity can be observed in the life style, architecture, music, dance, festivals and literature of the people of different districts. The people of J&K speak Urdu, Kashmiri, Hindi, Dogri, Pahari and Ladakhi languages.
The best seasons to visit are also categorized according to the climatic conditions, as each part differs greatly in topography. For visiting Jammu, it is October to February, for Kashmir- May to October, and November to February, and for Ladakh, it is Mid June to September

We request you to provide maximum information related to your travel plan in the "Requirements" field This will help us to process your information quickly and accurately.